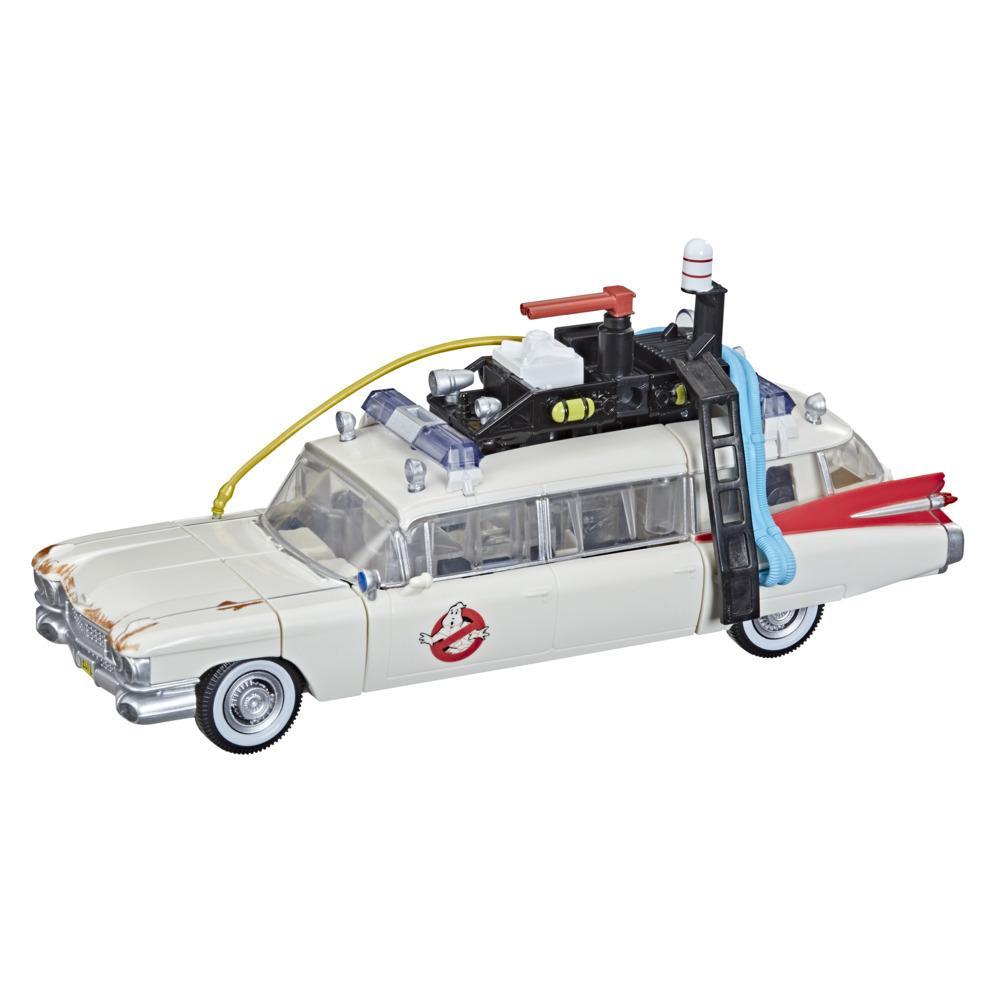 The worlds of Transformers and Ghostbusters collide through the Transformers Collaborative! It’s the world of Transformers…and Ghostbusters…a world of heroic Autobots, evil Decepticons…and ghosts! The iconic Ecto-1 Cadillac from the Ghostbusters: Afterlife movie is now a Transformers robot called Ectotron! The Ectotron figure converts between Ecto-1 and robot modes in 22 steps, and comes with a Proton Pack and Blaster accessories, Slimer and Muncher ghost figures, and issue number 1 of the Transformers Ghostbusters Ghosts of Cybertron comic book from IDW Publishing, featuring an exclusive cover. The figure also features an updated head sculpt inspired by Ghostbusters: Afterlife. Transformers and all related characters are trademarks of Hasbro. TM & © 2021 Columbia Pictures Industries, Inc. All rights reserved. Cadillac and all related Emblems and vehicle body designs are General Motors Trademarks used under license to Hasbro, Inc. Hasbro and all related terms are trademarks of Hasbro.

•MORE THAN MEETS THE EYE: Transformers robots have always been: More Than Meets the Eye, but now, through the Transformers Collaborative, fans can experience these larger than life characters as they team-up, mash-up, and meet up with other characters, teams, and people who share this same special quality
•ECTO-1 CONVERTS TO TRANSFORMERS ROBOT: Convert Ecto-1 Cadillac mode to Ectotron robot mode in 22 steps
•GHOSTBUSTERS AFTERLIFE-INSPIRED FEATURES: The Ectotron Ecto-1 figures comes with Slimer and Muncher ghost figures, as well as a Proton Pack accessory
•G1-INSPIRED PACKAGING…WITH A LITTLE GHOST OOZE: Features Afterlife Tech Specs showing the capabilities of Ectotron, including strength, speed, and bust-abilty. Figure also features an updated head sculpt, including updated Ecto-Goggles inspired by Ghostbusters: Afterlife
•CROSSOVER COMIC BOOK: Includes a copy of issue number 1 of the Transformers Ghostbusters Ghosts of Cybertron comic book from IDW Publishing, featuring an exclusive cover

We're sorry, but you are not eligible to access this site.